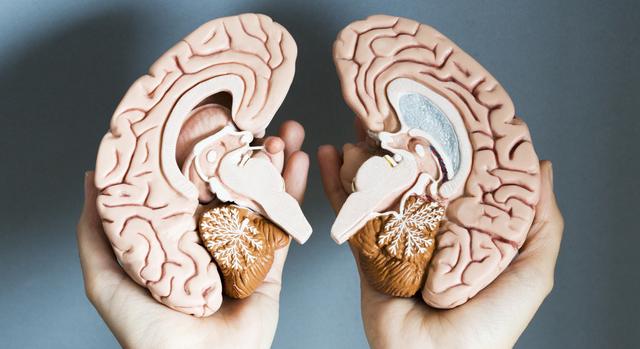 Last time we discussed?how to build?an effective network, be it in our personal lives or our professional lives. Today is the first of what I suspect will be a variety of posts busting common brain myths.

The older I get, the more amazed I am to discover how many of the beliefs I’ve held?over the years have been incorrect.

The brain and body have a relationship that is curiously flipped; in general, the right side of the brain controls the left side of the body and vice versa.?I am left-handed, as are a disproportionately large percentage of my family. As a young child I remember people saying that I am more likely to be creative and will appreciate the arts more than my right-handed friends. “Since you are left-handed,” I was told, “your right brain is dominant, which means you are more creative.”

This idea is called hemispheric dominance. It bothered me, because as a child I cared not at all for creative pursuits. I wanted to be a scientist from my earliest memory. Biology and chemistry, math and physics, those things supposedly belonging to the left brain were the fields that called to me. Yet I never questioned what I was told. I fully believed I was right-brained, without any evidence whatsoever. Only when I entered the world of neuroscience did I learn something that freed my left-handed, logical soul: hemispheric dominance is a complete myth, one thats demise is long overdue.

?For much of human history, especially in the west, philosophers divided thinking into two parts: the analytical and the creative. In 1844 a doctor named Arthur Ladbroke Wigan published a book titled, “A New View of Insanity: Duality of the Mind.” In the book he describes the two hemispheres of the brain as being two almost independent entities, each with its own unique way of thinking. This idea became quite popular in the 19th century, leading to “The strange case of Dr. Jekyll and Mr. Hyde” by Robert Louis Stevenson. Dr. Jekyll is the left brain?rational, logical, cultured?while Mr. Hyde is the right brain?emotional, intuitive, primitive. The idea of a cultured left brain and primitive right brain eventually fell by the wayside, but the rest of the myth grew.

I find it both fascinating and disturbing that this idea of hemispheric dominance, founded in the Stone Age of neuroscientific thought?long before psychology or neuroscience even existed as fields?has managed to continue into the 21st century. It would be a poor evolutionary model indeed if only one side our extremely energy-hungry brains was utilized to its full potential. Numerous studies, including?this one, have shown that individuals use both sides of their brains equally. While we may be left- or right-handed, we are not left- or right-brained. (It’s worth noting that the field of neuroscience never bought into this myth. These studies took place because the myth of hemispheric dominance?which was formed long before neuroscience could be said to exist?was so widely spread.)

This does not mean the left brain and right brain are exactly the same. They are different, both in form and function. This is called lateralization. For example, different aspects of language processing occur on different sides of the brain. While the two hemispheres look essentially identical, on a smaller scale we can find interesting differences that show the two sides of the brain do indeed do different things. There are also individual differences. Some left-handers (but not?the majority) have switched lateralization, in which what is usually processed on one side of the brain is processed on the other. In addition, individuals will have brains that are more or less lateralized than the average, and brains generally become less lateralized (more bilateral) as we age.?But at no point is one side more dominant than the other.

I was told about hemispheric dominance when I was a kid in elementary school. It bothered me then, yet I did nothing to research whether or not hemispheric dominance was real until I began studying neuroscience in university and a professor mentioned the myth in passing. It would have taken so little effort (about 5 seconds with any psychologist or neuroscientist, or the same amount of time with Google), yet I didn’t even make the attempt.

I’ve since wondered what other myths I might currently hold to be facts. In a world where the internet provides an incomprehensible quantity of information, there is more opportunity than ever before to research and correct our own flawed beliefs?and more opportunity for falsehoods to spread as well. To take full advantage of all this information, we must be willing to challenge even our deeply-held beliefs.