Know Your Brain: The Prefrontal Cortex 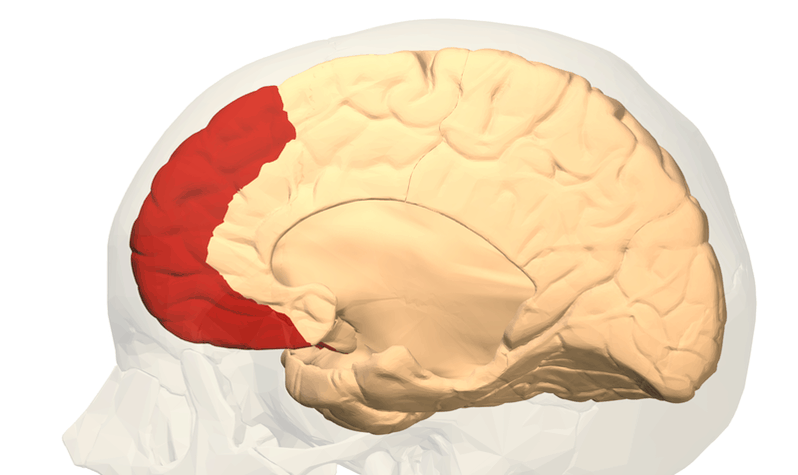 “Are all people like this?”
“Like What?”
“So much bigger on the inside.”
-Neil Gaiman, Doctor Who, “The Doctor’s Wife”

In my previous post, we discussed the value of practice, and how dangerous practice is if not paired with feedback. Today I would like to introduce you to the first in a series of articles titled “Know Your Brain.” Each article will discuss a brain area, neurochemical, or other valuable brain concept. By developing a richer understanding of how our own brains work, we will be in a better position to guide ourselves down a path of fulfillment and success.

When I explained why feedback hurts so much, I highlighted the fact that our brain is not “us.” Of the 86 billion neurons that makeup the brain, only a tiny fraction (roughly 3 billion) form our conscious awareness, the “awake,” thinking self. The part of our brain that is us – the core of consciousness – is the prefrontal cortex.

The prefrontal cortex (PFC) is the brain’s forward-most region. It sits in your forehead and is labeled in red in the picture above. In popular culture this is often referred to as the “human brain,” and for good reason. Evolutionarily it is the newest part of the brain, far more developed in humans than in any other animal. It is involved in self-awareness/consciousness, complex thought, critical analysis, attention/focus, planning, emotional awareness, decision making, personality, goal-directed behavior, and impulse control. It is indeed the brain region that makes us human, unique in many ways from all other life on the planet (though not as unique as many would like to think).

And most of what we’ve learned about the PFC has come from when things go wrong.

This is the tragedy of cognitive neuroscience; the field progresses primarily via the study of brain-damaged individuals, and the effects that damage has on their abilities and behavior. We owe an enormous debt to those who share their damaged brains, thus providing invaluable insight into our neurological workings.

Even more disturbingly, some of the most valuable understanding of PFC function did not come from accidents, but from brain damage intentionally inflicted on patients by well-meaning but disastrously ignorant doctors. In fact, the inventor of this brain-damaging procedure, Egas Moniz, was awarded the Nobel Prize in 1949 for his work. Tens of thousands of operations were performed regularly for decades before the practice fell out of favor.

That procedure he invented: The frontal lobotomy (or leukotomy).

The lobotomy was developed by Moniz in the 1930s as a solution for those suffering from severe mental disorders. Psychiatric drugs were still well in the future at this point, as was modern behavioral therapy, and the medical community was scrambling to help those with serious mental illness. In a world with no other options, the lobotomy was born.

Although it went through several iterations, the most famous version of the procedure, the transorbital lobotomy, was developed by Walter Freeman in the United States. It was designed to replace the traditional lobotomy which required anesthesia and a neurosurgeon with something that could be performed more quickly in a basic doctor’s office. It involved taking a tool that was virtually identical to an ice pick, inserting it around the eyeball and into the eye socket, then with a hammer knocking it through the thin layer of bone between the eye socket and the brain cavity. The pick would then be inserted up into the brain and the doctor would…simply swish it around.

I wish I could say that was an exaggeration, but it is not. Without being able to see what they were doing and with little precision of movement, the doctor would simply wiggle the pick around, with the goal of severing much of the PFC from the rest of the brain. The procedure was performed without anesthesia – patients were knocked unconscious with an electric shock, avoiding the need for an anesthesiologist – and took less than ten minutes.

Why on earth did doctors do this? By severing much of the PFC, they hoped to also sever the defective neurological pathways that drove the terrible psychiatric disorders in their patients. Lobotomies were performed primarily on those with extreme and severe psychoses, including schizophrenia, major depression and anxiety, and violent tendencies. But the procedure was also performed on those with chronic pain, on WWII soldiers suffering from what we now know is PTSD, and even on children whose parents simply wanted them to be more well-behaved.

While this practice seems downright barbaric today, it’s important to highlight that for most people the lobotomy cured their symptoms! In an age without any of the advanced therapeutic and pharmaceutical resources we have today, where victims of acute mental illness had no options except to be locked in a straightjacket and held in a mental asylum, the lobotomy was seen as a miracle cure. Many who underwent the procedure came out of it happy and calm, free from (or less affected by) the violent, psychotic, self-destructive thoughts and behavior that had formerly plagued them. With literally no other treatment options available, the lobotomy spread like wildfire.

The side effects, however, ranged from mild to horrific. Remember, the PFC is the seat of our consciousness, our human-ness. When a pick was shoved in the brain and swizzled around, results varied greatly. If too much of the PFC was cut off from the rest of the brain, or if the wrong neural pathways were cut, victims of the procedure were ruined forever. While patients were indeed often freed from their psychoses, they were also often left with a flattened affect (a severely limited emotional response). Bad behaviors were limited or eliminated, but so were most other behaviors. Patients would often stare at nothing for hours, and would be slow to respond to stimuli and to those around them. Other side effects included vomiting, incontinence, and eye problems. Oh, and death! The mortality rate was around 5%.

Personalities of lobotomy patients changed. Observers often noted they reverted to an almost childlike state. They had little to no impulse control, often behaving inappropriately in social settings and falling prey to addiction. The procedure often damaged their IQ. Sometimes it simply left them catatonic. Many lobotomy survivors could be described as human bodies who could talk and think and interact and even appear perfectly normal to a casual observer, but the human that was once inside was no longer there. Thousands of people had their humanity literally cut away with an ice pick. Even after the lobotomy, many could never leave the asylum; they were now simply easier to manage.

In the 1950s antipsychotic drugs finally hit the market, and lobotomies began to fall out of favor. Many countries banned the procedure entirely. One doctor from the former Soviet Union said the procedure made “an insane person an idiot,” a relatively accurate description. (Laurence, William L. “Lobotomy banned in Soviet as cruel.” New York Times, August 22, 1953. ProQuest Historical Newspapers 1851-2005.)

But from this enormous tragedy we discovered the value of the prefrontal cortex. Prior to this, the entire frontal lobe was often referred to as the “silent lobe” because it didn’t seem to do much of anything. Now we know that if our PFC is damaged or functioning poorly, we will feel apathetic, low on energy and uninspired. We will be forgetful, have difficulty focusing, and trouble following through on tasks. We will have limited emotional control and are more inclined to fall into the trap of ruminative thought, leading to depression and anxiety.

Conversely, when our PFC is healthy we will enjoy greater self-awareness and emotional control. We are better able to plan and follow through on those plans. We are more resilient to setbacks and have stronger intentional focus. Our critical reasoning skills, and intelligence in general, are both faster and more effective. The best version of ourselves can shine through.

Thanks to the incredible work of researchers, and the sacrifices of the unintentionally and intentionally brain-damaged, we now have a much clearer understanding of just how critical our PFC is to our functioning, and to the very essence of what makes us human.