Why the Rhino Scatters His S#!T

Why the Rhino Scatters His S#!T is about learning to thrive in 21st-century organizations. It’s about finding fulfillment at work, and liberating ourselves from the beliefs, behaviors, and assumptions that limit our potential and rob us of fulfillment. 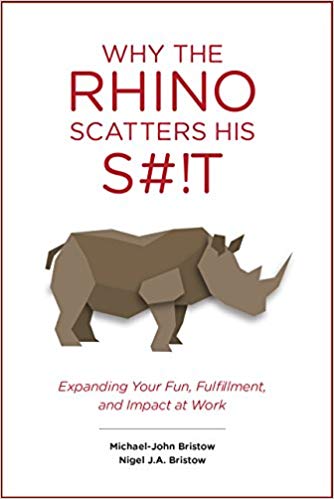 One sunny morning in 1995 a man by the name of MacArthur Wheeler started out on a brand-new career: armed robbery. Thus it was that he marched into two banks in Pittsburgh, Pennsylvania and demanded money at gunpoint. He did this in broad daylight, with no visible attempt to hide his face from cameras or from other people.

Police reviewed the security footage and arrested Wheeler the very same day. When detectives showed him the surveillance tapes, he looked shocked. “But I wore the juice,” he insisted. It turned out Wheeler had covered his face in lemon juice under the mistaken belief that since lemon juice can be used to create invisible ink, it would also make his face invisible.

This is one of countless stories of humans doing wondrously stupid things. It was the inspiration for later research by David Dunning and Justin Kruger at Cornell University. They found that the less competent an individual, the more likely that individual was to overestimate their own skill. In the study, those on the low end of the competence scale rated their performance to be five times higher than it actually was. These subjects remained unable to recognize and acknowledge their own lack of skill even after receiving training that highlighted how much they still had to learn. Later research found that even though highly skilled individuals also tend to overestimate their own performance, their self-assessments are not as far outside reality.

Like Rhino, we all have a tendency to overestimate our own skill level and to assume that other people see us in the same rosy light. This is why reality shows like American Idol can be so entertaining. It’s not the great performers who most pique our interest; it’s the terrible performers who think they are great that make the show so captivating. Watching them, we can’t help but wonder how they could possibly have thought they were competitive. The truth is we all suffer from equally large blind spots. Fortunately for us, they aren’t broadcast on national TV.

It is fascinating how some people succeed regardless of their circumstances. Their talents are always in demand. Their managers value and respect them. Their colleagues are eager to work with them. Above all, these people love what they do. How do they do it?

Michael-John Bristow and Nigel Bristow answer this question and explain how you too can achieve great things — and greater fulfillment — at work. Blending the wisdom of experience with groundbreaking neuroscience and psychology research, they provide concrete action ideas that will help you achieve your potential and experience greater fulfillment at work.

Michael-John and Nigel have the rare ability to translate the complex into simple, useable insights that resonate at all organization levels. Their stories are energising and memorable; their ideas are actionable and valuable for both the individual and the organization. The concepts they teach have inspired me and many others I have worked with to expand our impact and take greater control of our careers.